With a look out of this world (and a body for that matter), Jesse Mars is making his mark in pure, sultry style. 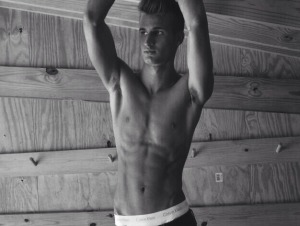 This New York native has kept himself quite busy over the years, modeling for various companies and boutiques, as well as, interning for multiple operations. Through it all, it’s surprising that he manages to accomplish everything to his full potential, while still enrolling in Fashion Merchandising at The Fashion Institute of Technology (FIT), and maintaining his incredible physique. But, even with his full schedule, I was still able to press him for questions about his fantastically chaotic life.

Well, with a face like that and a body to match, it must have been inevitable that he was going to end up as a model, right?  “Modeling was definitely not something I went searching for. It took me by surprise. If you were to tell me even two years ago that I’d be where I am today I’d say you’re crazy. Through high school, family, friends, customers, and even complete strangers would tell me that I have a face for the runway and I should pursue modeling. It wasn’t until I went away for college that I found myself in front of the camera.”

It’s quite surprising that he had never imagined himself as a model, yet that just makes for an even better story. So, how did his career even come about then? “As I was walking through the mall, the manager of Abercrombie & Fitch stopped me and asked me if I would consider working for them. I never felt I had the look for magazines or the runway, but I figured there must be something people see in me and I’ve learned to never miss an opportunity that’s given to me, so of course, I said yes and took the job as a model for Abercrombie.”

Ah, Abercrombie. I think we’ve all found ourselves gazing at the models, at some point, as we pass by the store, too intimidated to actually step foot inside. Yet, Mr. Mars definitely had the courage to do so. “Abercrombie was really when I began to build some self-confidence in myself. Customers would often tell me I looked like a mannequin and that I was a perfect representation of the brand. My store manager would have to take pictures of her store models and send them to corporate for cast-of, which were the models that best represented the brand and store. We’d pose in the back of the store like the models you find on Abercrombie & Fitch marketing including strict specifications such as cuffing pants, rolling sleeves, wearing sandals, and taking several shirtless pictures as well.  These pictures were sent to Corporate where they would choose model’s to represent that store and the brand as a whole for the upcoming seasons.”

So, Abercrombie is the start, but what was the first ‘official’ modeling job? “My first modeling ‘job’ was for a small boutique in upstate New York. I was shooting for the upcoming Fall/Winter lookbook. The set was small and calm and it was an amazing first experience. The photographer and everyone on set was extremely friendly and helpful for my first official photo shoot. It helped me get comfortable in front of the camera and let loose around strangers rather than my friends.”

Well, as for the modeling aspect, I believe the pictures speak for themselves. They can take him wherever his aspirations are. “A dream modeling job for me would probably be the opportunity to open for a fashion house like Saint Laurent, Dolce & Gabanna or designers Calvin Klein and Michael Kors at fashion week.”

Quite large goals, yet definitely attainable with the talent he possesses. That talent, however, has not only taken him behind the camera, but directly to the heart of the business, as well. “I’ve had the opportunity to intern for two companies.  My first internship was with a boutique in Saratoga called Jackson Rebel. It was owned by my best friend who I actually met while working for Abercrombie.  He took me under his wings and showed me everything he knew about the industry. He basically handed me the reigns to the company and told me to hold on, because it’s going to be a bumpy ride. I prepared online orders for clients and updated inventory. Learned essential techniques to running a small business such as price points, marketing, and maximizing sales. I would create my own concept boards and assist with the photo shoots for upcoming seasons. My favorite part of interning for Jackson Rebel was traveling down and spending a few days in New York City each season attending trade shows to purchase garments for upcoming seasons. Seeing clothes I would buy at the trade shows being sold at the boutique really brought a sense of pride and accomplishment to my work.

As for the second internship? “I have also interned for my cousin in-law who was the owner of a modern luxury women’s brand, Jordan Wolk. Headquartered in the heart of the garment district, this was a phenomenal experience. I would run errands throughout the Garment District, collecting finished garments from shops and factories and transporting merchandise to prepare for upcoming shorts, events, and conferences.  I helped with the Fall 2013 lookbook photo shoot. It was fascinating to watch everything that happens behind the scenes. The designers were focused on how they wanted each shot to look, the make up artists would jump in when they felt something had to be adjusted, and the photographer Jodi Jones was amazing at communicating with the models to have the best shots imaginable.”

So ambitious, so dedicated. There are bright things in store for Mr. Mars, but what does he imagination for himself?  “I’m looking forward to seeing where this road leads me. I won’t limit myself or set boundaries to anything and am anxious to see not only what New York City has to offer me, but also what I can bring to the table. Upon graduating from the Fashion institute of Technology I hope to begin my own menswear line. It will be very All-American especially when it comes to manufacturing. It has always been something very important to me when I think of my future in the fashion industry. While it is less expensive to produce garments across seas in sweat shops I would rather not cut corners for higher profits. I believe that by investing in America, America will invest in me. As for the design of the line, it will be very ivy-league inspired with a modern, edgy inspiration. But that’s years down the road…one thing at a time right?”

Right indeed, yet I’m sure the road Jesse Mars is on will be moving past quite quickly, for with his skills, ambitions, and Adonis-esque looks, the world is his oyster. I look forward to seeing what the future holds for Mr. Mars, but if I can guess one thing, it is a bright future, a very bright future, indeed.